One of the first cyclist I encountered in Adelaide had zip-ties attached to their helmet, making them look like……, I don’t know – silly I guess. Over the course of time, I noticed several cyclist with the same spikey adornments. I was going to have to investigate!  It turns out that they are a protection against swooping magpies. 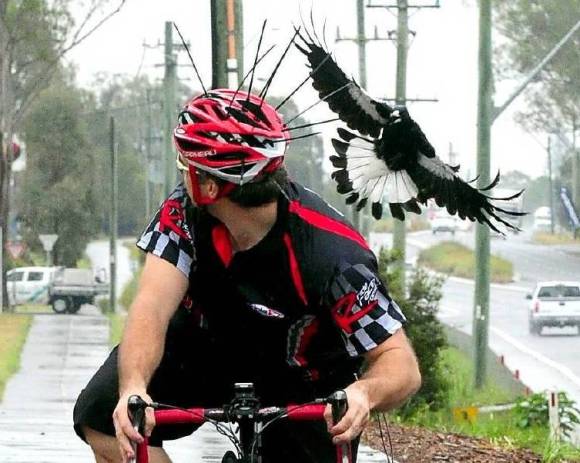 During nesting season, the male magpie is naturally protective of his offspring and will turn aggressive if he thinks they are in danger from anyone or any thing, including people cycling by and walking through his patch.

When we moved to Brisbane, I noticed cyclist using heavy duty zip-ties; was there a species of magpie I didn’t know about up here? Some cyclist had eyes stuck to the helmet to fool the magpies into thinking they were being watched back.

I naively assumed that cyclist were way more at risk of being attacked than someone on foot – so imagine my surprise when it happened to me.

I was wandering around the neighbourhood a couple of Sundays ago with my camera and macro lens. I had stopped by the local sports field and was taking particular notice of the detail in the bark of a eucalyptus tree, when all of a sudden something grabbed the top of my left ear. My immediate reaction was to flap my arms about, wondering what on earth had just happened. As I turned around to see what it was, I realised it was a magpie and he was coming back for another go.  I flapped around like a woman possessed  which made the magpie even flappier! I ran as fast as my legs would take me until I was out of his territory. By this time my ear was throbbing and I realised that blood had been drawn – two puncture wounds.

The advice to protect yourself from possible attack is to wear a wide-brimmed hat or carry an umbrella. I was wearing a baseball cap so the tops of my little ears were sticking up and easy bait for the upset maggie. The other advice is don’t run and certainly don’t flap around like a woman possessed.  I did both.

At work on Monday morning, I was reciting my experience to the gathered crowd and was expecting sympathy (yes, really!) when instead I’ve been welcomed into the ‘you are almost a true Aussie club’. Apparently I’m half way there and all that remains is for me to hit a kangaroo whilst driving  and I’m in!

Keep safe people – just remember to look out for the Drop Bears too!

By Waking the Wombat

Life - part two; Australia. Having spent the first 39 years of my life in England, with two adult children who don't need me so much, a workaholic husband and a head full of stuff waiting to be unleashed, Waking the Wombat is my place to share life's experiences with you.

Ha, ha, Lucy, I’m sorry about you being attached, but this is so funny. I can just see you flapping your arm about, Poor little Magpie, I bet you scared him as much as he did you. BTW I love Magpies 🙂 but know getting attached by one during breeding season isn’t funny.

Yes I knew you’d see the funny side 🙂 Apparently if we make friends with them they won’t attack but that’s a bit difficult when you are meeting them for the first time! And then of course there’s Penguin Bloom which is the most delightful and heart warming magpie story ever – have you heard of the Bloom family?

Oh yes, it is beautiful and so heart warming. I get goosebumps thinking about it. Then there’s ‘The Magpie Whisperer’ – you can find Danielle here: http://www.magpieaholic.com