Today I had the absolute privilege of spending my afternoon at an all female gathering, especially for women from diverse backgrounds. I was invited along by our multi-cultural advisor from work. As a mainstream white woman,  my presence was welcomed to help support and encourage the women to engage and practice their English speaking skills while sharing food, culture, dance and activities. The event provided an opportunity for the women to interact with other women. It was an opportunity for this vulnerable group to come to know and build their confidence around associating with women from other cultural and social backgrounds. Some of the women were refugees and some were asylum seekers and some like me, had emigrated.

We all took a plate to share and mine was cucumber finger sandwiches (crusts off).  Very English-afternoon-tea of me!

By the time I arrived, the hall was abuzz with the general hum generated by a group of women; you know the one, it doesn’t matter the nationality, it’s always the same hum (or din).  After greeting the hosts, I made my way to a table of Nepalese women – two generations.  I introduced myself and pointed to my hand-written name badge, saying my name, slowly, em-pha-sis-ing each syllable, way too loudly – what an idiot. We all smiled at each other and I did my best to decipher their names in return.  One of the younger ladies spoke some English and we exchanged knowledge of our families and how long we had been in Australia. She pointed to her mother who was adorned with gold face and ear jewellery. Our only shared language was a smile and the Nepalese greeting ‘namaste’.

Our first activity was to stand in two circles facing each other as we greeted one another and moved along to the next person. There were women of Aboriginal descent and from Nepal, Bhutan, India, Syria, Iran, Japan, Fiji, Tonga, New Zealand, Papua New Guinea, Sudan, Scotland and England.  You can imagine that hum had built to a crescendo by this time. Once the introductions were over, we shared our food and chatted as best we could.  I chatted with Shahnaz, a lady from Iran who was in Australia visiting her son and granddaughter for four months. She had pretty good English language which made for easy conversation.  I met her granddaughter, Helena. She was eight years old and attending school in Australia, she had quickly picked up an Australian accent. 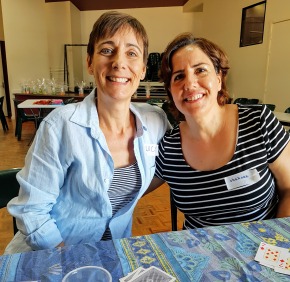 Next we taught them how to play a card game (last card). It generated lots of laughs and the rules went out the window but it was fun. One or two of the women told us their story of how they had ended up in Australia.

Finally, it was time to dance.  The women from Polynesia had us up first with some easy swaying moves which even I found easy. The music turned to Arabic pop (I think that’s what you’d call it).  The Iranian women had us moving our hips, moving our bellies and arms all over the place, plus a shimmy or two (actually that was just me).  The Nepalese women loved it and joined in with some mock moves of their own, emphasising the new Arabic moves they’d just learned.

It was time to catch our breath for a moment and while we refreshed, we were treated to a traditional Nepalese dance – lots of light footwork and rhythmic arm movements before we joined in.  One of the Nepalese women had a ‘dance-off’ with the Iranian dancer.  It was wonderful to see everyone laughing and having fun.

Dance was the one thing that united us all and bridged that gap – that massive gap. It didn’t matter where we had come from, how we had arrived, which god we pray to and which language we speak. For that moment we were all equal and nothing else mattered, nothing at all.

(Out of respect to some of the women who didn’t want to be photographed, I only have a couple of snaps of the afternoon.)

4 replies on “Bridging THAT Gap”

Sounds like a challenging yet entertaining afternoon for all concerned. Bridging the gulf between some nationality groups can sure be a tough call. Sounds as if you did it with ease. Congrats and keep up the great work.

Thanks! It was great. Next one is in May – progress report to follow.

I love this! We need to find more common ground these days.

It was a rewarding afternoon that’s for sure.